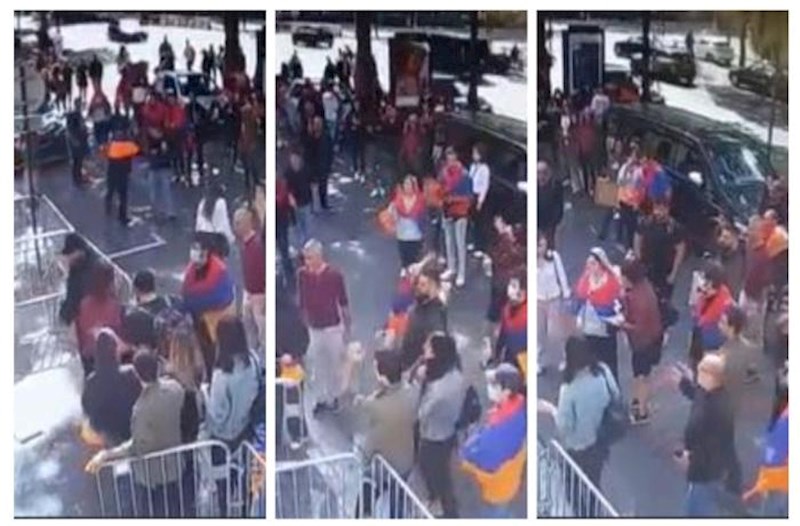 Criminal case has been initiated on the fact of an attack by members of a radical Armenian group on the administrative building of the Azerbaijan Embassy in France, Yeniavaz.com reports citing Prosecutor General.
On September 18, some local and foreign media resources shared footage of an attempt by several members of a radical Armenian group to forcibly enter the administrative building of the Embassy of the Republic of Azerbaijan in France.
Preliminary investigation launched immediately established that members of the radical group, by prior agreement, whose identities are unknown, violated requirements of the International Convention of December 14, 1973 "On the Prevention and Punishment of Crimes against Internationally Protected Persons, including Diplomatic Agents" committed an act of vandalism to strain international relations and incite war. Reasonable suspicions were established that on September 18, they attempted to enter the Azerbaijan Embassy in France, and caused material damage to the administrative building with items used as weapons.
Upon the fact, a criminal case was initiated by the Prosecutor General under Articles 12.3, 102 (attacking internationally protected persons or organizations) and 12.3, 186.1 (deliberate destruction or damage to someone's property ) of the Criminal Code of the Republic of Azerbaijan. Investigation is being conducted by the Investigation Department of the Prosecutor General's Office.
The Prosecutor General's Office has addressed MLA request to conduct an investigation of the criminal case in the framework of joint cooperation with the competent authorities of France.
Necessary measures are taken in accordance with international norms and principles to identify the perpetrators and bring them to criminal responsibility through a comprehensive, complete and objective investigation.
Səhifəni ziyarət et
Səhifəni ziyarət et
Səhifəni ziyarət et